So day one of our training is wrapping up.  Yeah there are a bunch of us still in the lab at 9:30pm after starting at 9am.  This is the very first time they have offered the advanced iOS class and consequently we have discovered several small problems with the materials but that is to be expected.  To compensate, we have not one but three excellent instructors here with us and I have to say despite the exhaustion of the long day I am learning a lot.

We took a short break around 3:30 to hike around outside.  The weather is such that I almost didn’t need a jacket which totally ROCKS since it is January.  The weather here really makes me want to move south.  In terms of ground covered, I didn’t really cover any new territory than what I saw by myself last night but it was great to get outside, enjoy the beautiful surroundings, and rest my mind.  Every time I go outside I am staring up at those zip-line cables.  I have yet to see anyone on them but man are they impressive.  Some of the stands are WAY up in the air and some are literally just a few boards wrapping a huge tree with no ladder or stairs.  It looks like it would be fun and terrifying. 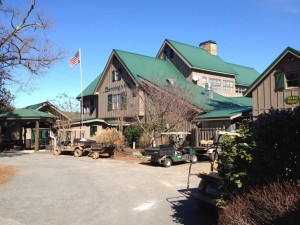 What about the food?  Anytime I travel anywhere I always panic about food since I have the gourmet palette of a 12 year old.  The folks that run the Banning Mills facility have been awesome for accommodating my crazy cheese-free, simple, diet.  Right off the bat, they had a salad prepared for me without cheese!  Woo-hoo!  The main course last night was some sort of stuffed chicken and mine came without the cheese sauce!  Again I was impressed but really didn’t care for it since it had the stuffing.  Today’s food however has been great starting with a very good breakfast with fresh fruit and bacon.  Lunch was chicken legs and corn on the cob both which were very good.  Dinner was something new (for me) called Souvlaki.  It was a pork loin with greek seasoning on skewers.  It was actually pretty good!  Dessert was apple crisp which I decided to try since I am being adventurous and it was good too!  All said, I am eating well and I am really thankful they have honored my strange requests.

So what did we cover today?  We started with Storyboards and in particular custom segues.  This gave me a chance to experiment with some Core Animation effects I had never seen yet.  We then moved into the core image framework and filtering.  The variety of options available in this API is impressive especially since it is new with iOS 5!  We did a nice lab with face detection.  We also applied various filters (like sepia) to any photo picked from the photo library.  I finished the lab early so was able to experiment with some other filter effects.  Note that filters can also be chained together which can give you a lot of power.

We continued with more Core Animation and then wrapped up with Core Motion and using the 3rd party Core Plot framework.  Both labs involved a lot of typing and debugging but ended up with sample apps that were quite awesome.  Yes that was a LOT of stuff to cover in one day but every part of it was cool and revealed something new that I hadn’t seen.

The lessons and labs are interspersed with some great productivity tips.  For example control->command->up and down arrow are shortcuts for flipping between your header and implementation files.  Simple tip, but I have probably used it 50 times since it came up this morning.  It is one of those conveniences that is etched in my mind now.

Though we have seen a few issues with the lab manual, they are kind of a blessing in disguise.  The best way to get deep knowledge of anything is to challenge yourself and wrestle with a problem.  These minor issues, when they have occurred,  have caused us to dig deeper.  Looking forward to another great day tomorrow!