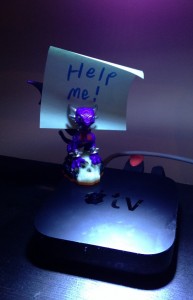 For the last couple of days I have been ranting more than usual on Twitter about the Apple TV. Why? Do I hate it?  Quite the contrary, I think it is a great box and over the last couple of years I have bought more than a half dozen of them as either gifts, for use in my home, or for business. They are a great little box for a great price and the time is ripe for them to mature beyond the “hobby” phase!

I know there are many of us who have grown to love the current capabilities of the Apple TV but are even more excited about the possibilities of what it could be! The changes that I am talking about are actually not that significant and until the last couple of days I have had fairly high expectations that we might see these before the holidays.

Here are the two major changes I have been hoping for:

1. Open up the API to developers and expand the App Store to the Apple TV
2. Do a small hardware refresh of the current Apple TV set top box

That is it! Just a couple little things–well the first request is a bit bigger but Apple should have enough engineers/magicians to pull that off!

You see, even though I am intrigued by what a full-scale Apple iTV might be or look like, I realize that the content is likely to continue to push that out for at least another year or two. Content is important to many but what I believe is more important is staking out the battle grounds now! Later this week, the PS4 will be here with the Xbox One to follow next week (unless you are one of the lucky few that they already shipped units too). Since WWDC, I have felt very strongly that Apple could really grab a large percentage of the gaming market just with these updates. I know, most gamers will think this is ludicrous but I am not talking about those types of games. I am talking about a logical extension to the games popular on iOS today that could have big benefits beyond AirPlay.

You see, there are a couple hundred thousand iOS developers who would love to have a new extension to their beloved platform of choice. They would love to push some slightly updated hardware to its limits for both games and entertainment. They can and would drive adoption!

So why have I been ranting on Twitter the last two days? Yesterday, there were reports that the Apple TV efforts have been delayed significantly to refocus priority on the wearable computing efforts. Today, new reports came out supporting this-noting that it may be due to reduced Apple TV sales in 2013.  I really think much of the reduced sales are people waiting for the hardware update. According to MacRumors, it has been 615 days since the last update. Apple, it seems like you may be big enough to squeeze in a minor update! You can even release it to the stores quietly like you did with the new retina mini.

What do we need from a hardware update? Not much! Bump the processor up but more importantly add enough memory for the apps we will want to install. It would also be great to add that new wireless chip for 802.11ac!

So what do you think?  Can we get these updates for the 2013 holiday season?  Can I and all of my iOS developer buddies start writing some great apps for an already excellent device?  Can the Plex folks put the app on the TV where it belongs instead of resorting to hacks?  Apple, the time is now to lay your claim to the big screens we already have!  Microsoft and Sony are ready for a full scale attack with this round and they would like to forever seal the fate of our beloved little black box.