Whoa! Hey! It has been a really long time since I have posted anything new and for that I am truly sorry. Looks like my last update was from The Big Nerd Ranch’s incredible Advanced iOS class near Atlanta. Interestingly, a few months later, I find that my next post is from the World Wide Developer Conference in San Francisco – WWDC 2012.

Nearly 2500 miles and hundreds of hours of development time exist between these great developer experiences and I find myself working harder than ever developing new apps and crunching as much iOS knowledge as possible. I have a lot I would like to say about what I have been doing since my trip to the BNR but for now I want to focus on today’s Keynote.

Last year around this time, I was attending my very first WWDC and was able to see Steve Jobs do one of his last (if not the last) presentations. It was amazing to get to see and hear him live! His enthusiasm and presentation style can fully energize a room like none other that I know. I truly missed the way he would always save something special and spectacular for the end – “…one more thing.”

This morning we didn’t have Steve nor “one more thing”, but that didn’t stop the crowd. WWDC 2012 sold out in 1 hour and 43 minutes. Thanks to some great friends, I was one of the exuberant few who were fortunate to purchase a ticket.

This morning, I slept a bit later than I did on Keynote day last year but still joined the line 2.5 hours before show time. At that point it wrapped completely around the block surrounding Moscone West with many people already inside. Regardless, we slowly marched around the block to roughly where we had started over the next 2+ hours. The weather was beautiful with pure blue skies and tremendous amounts of hot sunshine which was in surprising stark contrast to last year’s weather.

Despite my late arrival to the line, I was fortunate enough to get into the main room and make my way up one side about half way up the room just a couple of minutes before a special introduction to the conference from Siri. The Siri intro was quite comical and set a great tone for Tim Cook to take the stage. Tim doesn’t yet have Steve’s presentational polish, but it was clear over the next couple of hours that he has successfully led the team of magic elves that reside in Cupertino. They have really been cooking some great stuff since WWDC2011.

Three main announcements were featured: updates to the Mac notebooks, updates to OS-X, and updates to iOS. All three had nuggets of goodness that caused many a developer to sit straight up on the edge of their seat.

The next generation MacBook Pro really is pretty amazing. Not only is it absolutely beautiful, the resolution and performance appear to be top notch. I really wish they had released this a month ago when I had to get a new MBP! The attention to detail and care in even the placement and efficiency of its fans received huge approval from the audience. It is hard to imagine running a screen with 2880×1800 resolution!

The Mountain Lion update for OS-X is set to arrive next month (July) and is only going to cost $19.99 to upgrade all of the computers in your household! The features of particular interest to me are full air-play support (I have two AppleTV’s and AirPort Express so big YAY), more iCloud integration, Reminders, and iMessage! With these changes, I may actually move to Reminders and off of Google Tasks. I have been wanting completely integrated reminder functionality across all of my devices for a long time! If your home computing and mobile ecosystem is completely Apple, you will really benefit from this release. Notification and Safari updates are pretty sweet too.

The area of most professional interest to me is the announcement of iOS6. As with Mountain Lion, there were more than 200 new features added. The biggest new feature here is a completely new mapping system. Google Maps has been replaced and while I was skeptical when I heard the earlier rumors, the demos today were amazing! We FINALLY get turn-by-turn directions but with Siri integration. I know my Google friends are laughing as they have had turn-by-turn for years. Regardless, the integration of features now has a very complete feel to it. When demoed, the progression of asking about restaurants, seeing the map complete with 3D flyover, and integration with Yelp for reviews and Open Table for reservations looks elegant and has that fluidity and user experience finesse that makes you feel like it has always existed and just works.

Well, I need to get to sleep as day two starts tomorrow! I have taken many pictures and will hopefully update this to share some shortly. Not sure if it will be this week as the wireless in our hotel is more than a bit spotty especially since it is full of people downloading the latest updates and betas.

Time for my end of day ponderings for day 3 at the Big Nerd Ranch.

I thought about this a bit yesterday but today it really struck me.  This class and 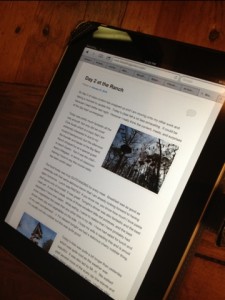 really the power that the iOS framework provides really taps into every major point of interest I have in software development and technology.  I have not gotten to think about some of the concepts we have discussed here since my days studying electrical engineering at UC or my time at ITI working with graphics modeling and Open Inventor.  For me, this week has truly been a wonderous trip down memory lane.  I feel like I am in the Land of Oz.  Thanks to the instructors – Jonathon Blocksom, Jonathon Saggau, and Michael Ward for that trip!

While we have covered the Cocoa frameworks in a broad, sweeping sense, the Jon’s and Mikey have added interesting historical viewpoints and perspectives.  Bezier curves and surface normals take me back to fond memories struggling with the challenges of writing CAD/CAM data translation software and 3D model viewers.  Those days were really the most challenging and fun in my career and while I still have fun today, I miss some of that excitement!  I left the engineering software realm  to go into corporate IT web development many years ago.  Now with my present focus on mobile development and the driving market forces of the day I find that I may be ready to go full circle.

How and why?  Demands for advancement in software development in the corporate IT field used to drudge along – typically held back by operations and security teams not wanting to move forward so as to protect things the way they are.  With so many people now owning iPhones, iPads, and Android devices consumer expectations towards technology and above all the user experience has totally changed.  This demand will drive us in the IT field to do better! The boring days of Windows and the status quo are thankfully over!  Note this is an opinion piece and certainly I am sure some of you have a different one.  Regardless, it is my belief that the opportunity to develop really cool, engaging, and challenging apps will now be forced upon every business entity or the consumers will simply move somewhere else.  So to the simple, boring, 1980s style web forms and ugly web pages of the 90s I bid you adieu.  To developers without passion, you are going to miss out on a lot of fun!

Today one Jonathan led us thru the power of OpenGL ES and GLKit.  Yes I know OpenGL has been around for years, but most developers have never had to worry about it.  Unless you are writing video games why would you care?  Again, I can see a lot of people caring about this a whole bunch as we are forced to develop solutions that become more engrossing and more 3D.  Good grief Dominoes Pizza even has a game now.  I have been looking forward to a business need to get back to 3D development and this is it!

FFTs?  What is that?  Fast Fourier Transforms are something I haven’t looked at since my Signals and Systems class at UC.  I use pitch shifting (just one of many uses for FFTs) quite a bit as a musician but never had the chance to work on incorporating that into a development project until yesterday.  Again, it was great to have this discussion appear in the class.  The possibility and capability afforded by today’s consumer grade hardware is truly astounding!

More than anything this week I have began to appreciate the parallels at the technical level between two of my favorite things – audio (MUSIC, MUSIC, MUSIC!) and video and the power that Apple’s collection of frameworks has given today’s developer to create new things using both.  The mathematics using linear algebra, modifications with filter chaining, and low level patterns for hardware acceleration are common to both.  I haven’t been this energized about development for many, many years!  It was pretty hard to get excited about SOAP and EJBs.  Yesterday I tweeted that I had spent more time in this computer lab than any other time since college and I have truly enjoyed every minute of it.

The one sad note for the day…  It rained so unfortunately no afternoon hike and thus no new pictures.